I often hear and see people claiming that sugar is bad! Clients will tell me that they are “cutting back on sugar” for example. When asked what foods they mean specifically it usually includes things like biscuits, chocolate, cakes, ice cream etc. But these foods aren’t just “sugar” – they all contain significant amounts of fat too.

As you can see from this comparison – 100g of sugar contains nothing but sugar. It’s 99.9 g of carbs – no fat, no protein etc. All of those carbs are sugar. The biscuits on the other hand contain around 62g carbs, of which only 28g is actually sugar. It contains almost as much fat, other carbs and some protein etc. These foods that people commonly associate with sugar are a mixture of sugar, fat and salt which make them hyper-palatable. That means they’re designed to taste really good – which encourages you to eat more. Eating 100g of pure sugar in one sitting is actually not a pleasant experience (try it – I dare you lol!) and it isn’t something most people would do. Eating 100g of biscuits though – well thats super easy and is only 4-5 biscuits in most cases. To consume the same amount of actual sugar as pure sugar you’d need to eat 350g of biscuits in one sitting (which is over 20 biscuits!).

So this combo of sugar, fat and salt is what makes biscuits and other snacks so easy to over eat. That’s not to say biscuits are bad but they have the potential to derail you from your goals because they’re calorie dense (i.e. more cals in a smaller package) and as I said they taste great so you’re likely to eat more. So it’s not the sugar thats causing this – its the combination of ingredients in these products. So vilifying sugar is pointless and a misunderstanding of where the real issue lies. In fact sugar is actually an important nutrient and the brain’s main fuel source.

In sum, sugar isn’t “bad”, it isn’t causing you to gain fat in itself. If your diet contains a range of whole foods and is balanced overall then having the odd “sugary” snack like biscuits/cakes etc is fine – just account for it in your calories.

Tuesday Tip: To Avoid Gluten or Not? 🍞

Do you really need to avoid gluten? For the majority of us the answer is no! It’s pretty trendy right now to ditch carbs and specifically to ditch gluten but should we really be doing that?

For 1% of population who suffer from Coeliac disease gluten is a major problem. It’s is an autoimmune response which causes the body to attack the protein in gluten, ‘gliadin’. These attacks damage the villi lining the small intestine preventing normal nutrient absorption. It’s a serious condition; sufferers experience severe stomach problems and may be in extreme pain. It’s not a ‘bit of bloating’. It’s diagnosed with a blood test, and you’d know if you had it! In a further 3 – 5% of the population there may be some level of intolerance to gluten resulting in stomach upsets. That leaves 95% of us with no issues whatsoever.

Gluten is a compound with a large surface area so it takes longer to be digested. This means you could be suffering problems from simply eating too fast and not chewing properly, so try chewing 15 times per mouthful to keep the enzymes working in your mouth, so that some of the digestive process can start before food even reaches the stomach.

People often complain that bread, pizza or pasta etc are making them bloated and that as a result they avoid gluten at all costs. But don’t be too quick to blame gluten. It’s not uncommon for these foods to make you bloat. The cause of this bloating is not the gluten, but actually water retention as a result of the short-chain carbs in wheat-based foods. So combat this by going for complex carbs – wholegrains, wholewheat breads etc and ensure you’re drinking lots of water. And if you do think you’re reacting after eating meals like pasta or pizza, then it’s probably far less likely to be the gluten and more likely to be the fatty cheese, roasted onions and rich toppings and sauces causing the problem – not the pizza base or pasta itself.

If you think giving up gluten will give you an energy boost,I’m afraid you’ll be wrong. Recent studies show that going gluten-free, when you don’t need increases tiredness and fatigue. Gluten-containing foods also provide a range of other nutrients we need so cutting it out you can cause more probs. Instead chose foods full of slow release carbs e.g. wholewheat pasta and bread, and lots of fruit and veg.

So before you diagnose yourself with a gluten sensitivity and drop all wheat, spelt, rye, barley etc perhaps stop and have a think. What is actually happening? Sure maybe you’re bloating after certain foods or meals but you’ve probably been eating gluten your whole life right? So why would you suddenly be intolerant of it? You weren’t ten years ago…. If you really feel like you react to gluten then speak to your Dr asap and arrange a proper test, otherwise enjoy a wide variety of foods that you like to eat! 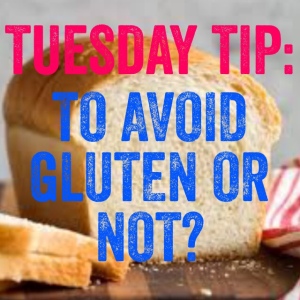 I’ve talked before about the marketing power of “protein” and how snacks (and other products) are often promoted as “healthy” or better because they contain X amount of protein. The reasoning behind this is the fact that increased protein can help with improved satiety (feelings of fullness) so CAN help to prevent overeating. Also those working out may want to focus on protein to help with muscle building. Unless you’re a bodybuilder or athlete you probably don’t need to go out of your way to take in extra protein as most balanced diets contain far more protein than the average person needs. However you may still wish to focus on higher protein foods and snacks to help keep you feeling full.

So you may well see this protein cookie and think it would be a good snack option – it’s something that feels like a treat (a cookie) and it’s high in protein – win win! However it’s 420 calories (and as an aside it lists the calories as 210 cals per serving… with a serving being half a cookie… which no one is ever going to actually have so they must realise they’re high cal!). It contains 16g of protein which is pretty good I guess.

Oh but this is awkward… you could instead have a 170g pot of greek yoghurt with 100g raspberries, a curly wurly AND a single slimline gin and tonic…for a mere 306 cals, and it will actually provide you with MORE protein – 19g in fact! And aside from the fact it’s a lower calorie combo, and has more protein, it’s also far greater volume – which also helps to keep you full. And it will probably help keep you on track as it allows you to have some chocolate or a drink etc without detailing you from your goals. 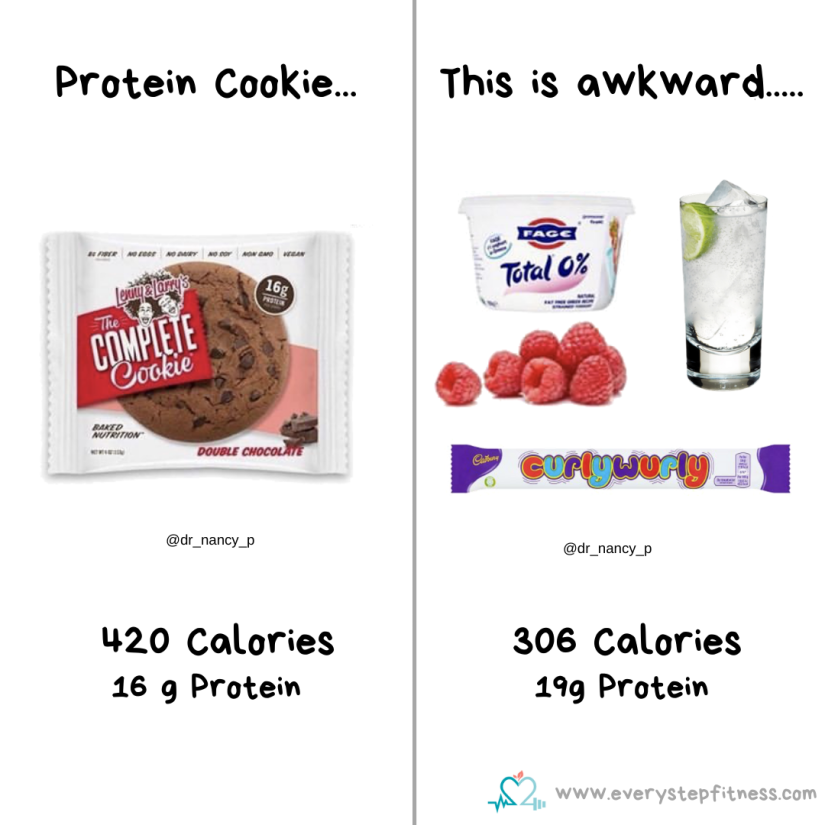 You often hear people talk about insulin being “spiked” by carbs and that insulin is putting your body into fat storage mode and therefore causing fat gain. Insulin helps to move nutrients out of the bloodstream into cells, where they are either used for energy or stored. The argument is that because insulin causes an increase in lipogenesis (fat storage) and a decrease in lipolysis (fat breakdown) that it must be responsible for putting on fat. The argument then continues that as carbs cause insulin to be released, they will cause fat gain, and therefore high carb diet will result in fat gain. The reasoning then follows that a low carb diet is necessary for fat loss because then insulin levels will be kept low.

Fat gain can only occur if the rate of lipogenesis is greater than lipolysis. In healthy individuals insulin only increases in response to food. So after you eat lipogenesis will increase and lipolysis (fat breakdown/burning) will be reduced, and fat storage may take place. However when those levels of insulin drop fat burning will resume. If you’re in a calorie deficit and expend more calories than you consume, then when insulin levels drop (between meals and overnight) fat burning will be greater than fat storage and you will lose fat. This happens no matter WHAT you eat – even if you ONLY ate carbs.

Equally if you’re not losing fat then that means you’re in calorie surplus. Total calories consumed are what determines fat loss or gain, not insulin levels. Even when insulin levels are low you can still enter lipogenesis (fat storage) due to an enzyme called acylation stimulating protein. This is why there are no studies showing significant differences in fat loss of low carb compared to other diets when calorie levels are controlled. In fact studies have shown that even with high carb diets, when insulin levels are therefore greater, there is still fat loss if there is a calorie deficit.

Going low carb isn’t a sustainable or healthy way to lose weight; healthy balanced meals are the way to go. You don’t need low carb diets, if you’re truly in a calorie deficit you will lose fat.

Just a short tip today. This is a simple thing that can make a big difference. If you’re tracking calories then do be careful when tracking things like pasta, rice and other dry grains. Depending on the brand and type you may find the calorie info relates to cooked rather than uncooked weight.

The difference is very significant! If you’re logging the calories as 151 but you’re actually eating 351 cals that could have a significant impact on your progress. So be sure to look carefully at the label – usually they will state uncooked weight or cooked/ ‘as prepared’ weight – so be sure to track accordingly!

Every Step Fitness
Blog at WordPress.com.