Fad diets and massive changes to eating and exercise habits work well for some people, in the short term but research shows that for most people these drastic changes don’t last and only increase the likelihood of gaining back the weight when we go back to our old ways. It’s also overwhelming and much more likely to lead to failure. So stop trying to change everything at once!

Instead, identifying lots of smaller changes and trying to do them daily works much better. This ‘habit stacking’ has been shown to be more successful than making one massive change. Big goals are overwhelming and scary, and you’re far more likely to stick to small, easy changes and you’ll also get a confidence boost from sticking to them.

So for example rather than going cold turkey on sugar try reducing your 2 spoons of sugar in your tea to one, then none, try reducing your soft drinks to one a day instead of three, try adding one portion of veg to your meals, then two etc. A recent study showed that it takes approximately 8 weeks for a new habit to form so stick with them and you’ll find these new habits will stay with you! 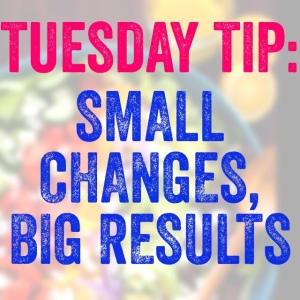