Social media is full of claims about things that will speed up your metabolism so you burn more calories but sadly most of these claims are false. Here are a few of the myths.

#1 Smaller frequent meals speed it up

Smaller, more frequent meals won’t do anything to your metabolism. Eating 6 small meals or 2 large ones really just comes down to preference. More small meals can lead you to overeat unless you’re being very careful with the portions. So, rather than measuring the size and frequency of your meals, pay attention to calories.

#2 Skipping meals slows it down

Skipping meals isn’t necessarily something I’d recommend but it won’t affect your metabolism. You’d need to be at a massive calorie deficit for considerable time to enter “starvation mode” and impact your metabolism. The issue with skipping meals is you are more likely to binge later, but if skipping a meal works for you and doesn’t make you eat more later then go for it.

#3 Caffeine speeds it up

Yes, caffeine does raise your metabolism, BUT crucially only for a short window of time. To get a significant effect on calorie burn you’d need to keep yourself caffeinated which causes poor sleep, heart issues, jitteriness. Caffeine is a diuretic (you pee more) which dehydrates you, which actually slows your metabolism! If you like a coffee, or need a bit of energy before a workout, then go for it, but don’t think it as a free pass to eat more!

#5 Chilli speeds it up

Chilli makes your food taste better, but it won’t give you much of a boost. The capsaicin in chilli peppers does very slightly increase your metabolism for a short while, but adding it to your food or taking pre-workouts/fat burners with it in won’t make you shed kgs I’m afraid. 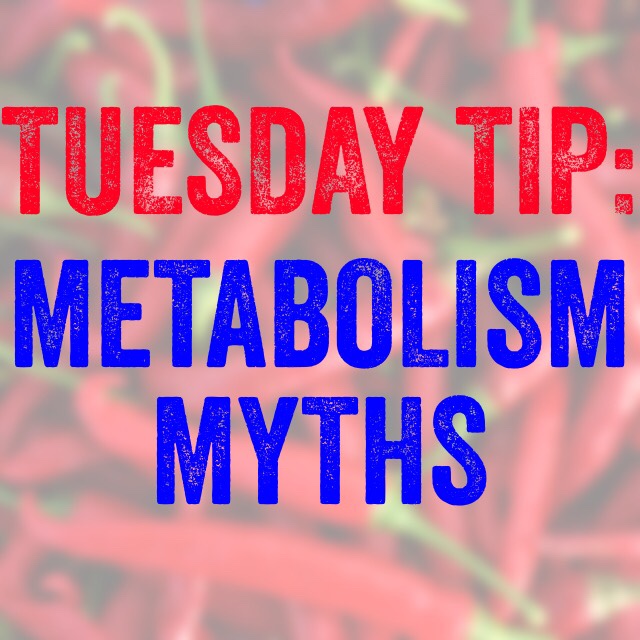