‘I have a really healthy breakfast…’ Often people will tell me they start the day off really well, with a ‘healthy’ breakfast… of muesli (or some similar ‘healthy’ cereal). Those same people would probably scoff at those starting their day with a bowl of cocoa pops. Given the choice most people would assume the muesli is the better option but is it really?

A 30g portion of a standard supermarket fruit and nut muesli comes in at 154 cals and almost 8g sugar – but who actually has 30g? A more normal serving would be closer to 100g in which case you’re really racking up the calories and sugar.

When it comes to fat loss it’s the calories that matter – create a calorie deficit and you will lose fat/weight. So in this scenario you’d be better off with the cocoa pops. Now there are some additional benefits to the muesli – increased fibre, and a little extra protein and fat which will help keep you a little fuller, but the differences are not as large as you think. Most cereals are fortified with vitamins and minerals anyway so you’re not missing out on as much as you think with the cocoa pops.

Now personally, despite being a massive chocolate fiend, I am not a fan of cocoa pops at brekkie – but not because I think they’re that much worse than muesli – rather I just don’t want sweet chocolates cereal at that time in the morning lol!

However if you love cocoa pops and you enjoy a bowl for brekkie then go for it! If you love the muesli then have it! But if you’re eating muesli because you think it’s healthier then you’re better off not bothering. As long as you’re having a balanced diet you’ll get plenty of nutrients in throughout the day so if you love cocoa pops enjoy them! 🥣 😋

Whichever you choose – read the labels, check the calories and be mindful of your portion size but most importantly enjoy it! 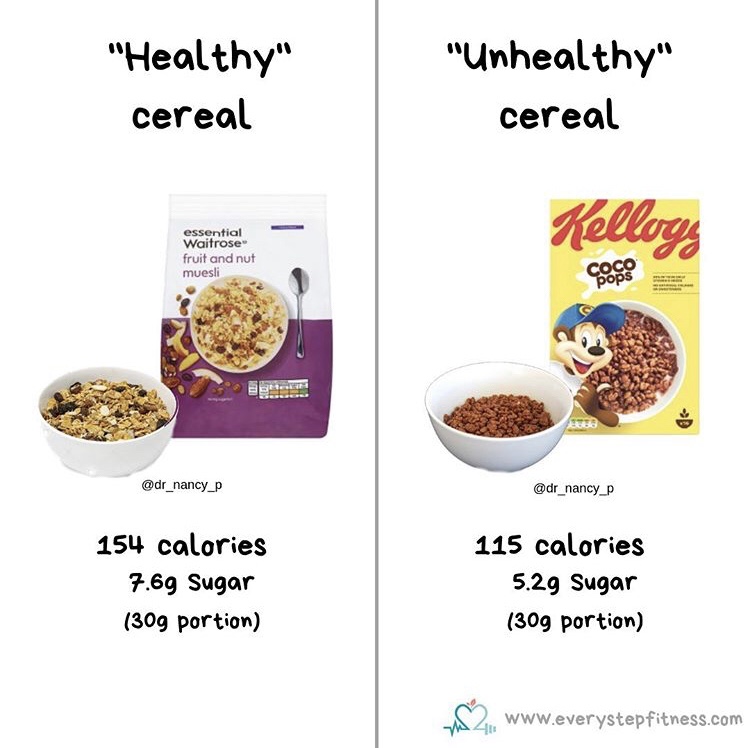