Lasagne is such a popular dish but can be so full of fat and other processed nasties so I thought I’d have a go at creating a healthy lasagne. I’ve never made lasagne before so I’m pretty proud of this. It tastes divine, as good as any “normal” lasagne, rich, creamy and satisfying! 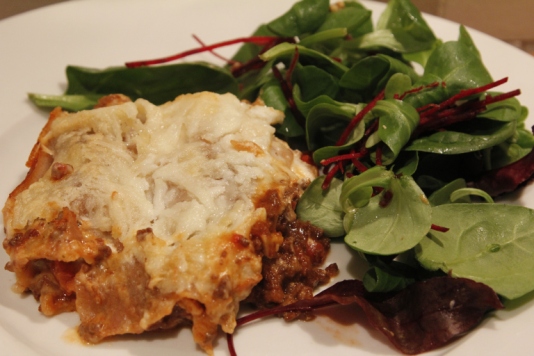 a pinch of nutmeg (optional)

For the rest of the Lasagne:

150g soft goat’s cheese or your choice of cheese

Grated hard goat’s cheese for the top or any cheese you want!

Start by soaking the soya mince in the vegetable stock and olive oil. Allow it to absorb the water, ideally leaving it for at least an hour, but if you haven’t got time then just until it absorbs the liquid. If you are using quorn or another veggie mince then you don’t need to  soak it first so you can skip that bit! Chop the onion, garlic and red pepper. Add the onion to a large pan and saute until translucent. Add the garlic and pepper and saute for a further few minutes. Add the soya mince, stirring well and then add the tomatoes and tomato puree. Finally add the herbs. Bring to the boil then simmer for as long as you can, at least 20 minutes. Taste and season.

Meanwhile start on the bechamel sauce. Add the olive oil to a cold pan and place on a moderate heat. Add the flour and mix continuously using a wire whisk. The flour will dissolve in to the oil and there shouldn’t be any lumps (if there are you can always run the sauce through a sieve later so don’t panic). After a few minutes, once the flour and oil are mixed and starting to form a paste you can start to slowly add the milk. Run the milk down the side of the pan and start with a little, whisking all the time to prevent the sauce separating. Mix all the time and continue to add the milk. After you’ve added about a third allow the sauce to thicken, then add more milk, continue with this until you have the consistency and amount you want. Add the salt, pepper and nutmeg.

Pop in the oven for 35 minutes, or until the cheese is golden and bubbling. Enjoy with a side salad 🙂

(This recipe was originally posted on pureformfitnesskitchen.com) 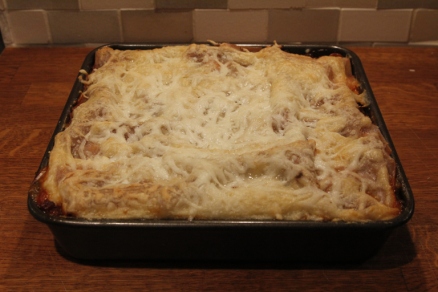